Each year thousands of tourists from all over North America visit Texas’ Stone Mountain which is second – and but slightly second – to Georgia’s and possessed of a glamorous and adventuresome saga that dates back to the days history cannot penetrate. The mammoth Enchanted Rock, rising in a slow curve from the wooded hills between Llano and Fredericksburg, is visible for many miles in all directions. And its eminence gives a sweep of vision for 20 miles. So huge is the rock, that, even under its shadow, visitors misjudge is proportions, and innocently start out for a breakfast appetizer climb that, before it is ended, consumes most of the morning. You can’t estimate how large it is because there is nothing near by to use for a measuring stick. Small trees growing in its crevices look like grass and weeds from below: the great vultures that police its barren slopes appear to be diminutive crows. The seemingly smooth surface conceals entrances to dark and tortuous caves far below masses of crumpled granite, which have slid form their foundations at some remote date before the memory of white men or of the Indians who feared and told tales of the Rock. One of these caves has its entrance on the summit of the Rock while the exit brings the explorer back to daylight far below on the back side.

The Rock, a gigantic dome of the famous “Texas Pink” granite, covers 640 acres and is estimated to be 500 feet high. The climb from the foot of the mountain to the pinnacle of its massive expanse is about a mile. 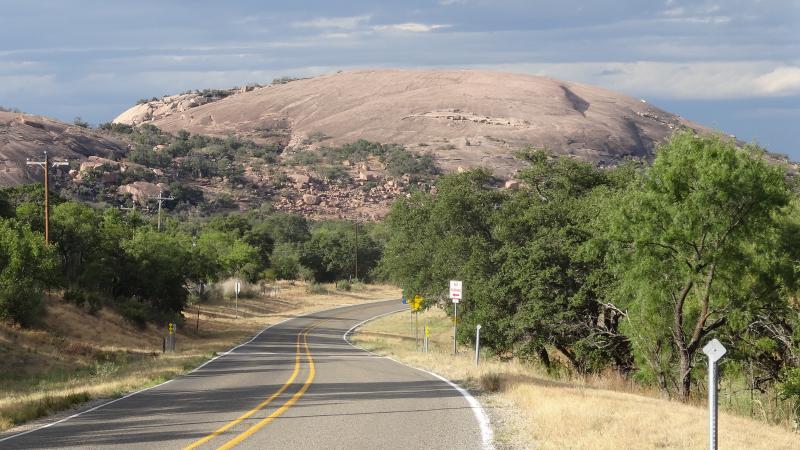 WHY THE ROCK IS CALLED “ENCHANTED”?

The name “Enchanted Rock” goes back into the unwritten chapters of Spanish and Indian history and tells the story of aboriginal rites and ceremonials, of wars and loves and treasure seekers: stories of which we have but fragments enduring as he Rock itself.

Unforgettable as a landmark, and invested with the glamour of gold-seekers’ stories, it impressed early visitors to Texas and inspired newspaper articles in New York, Kentucky, and other distant states more than a century ago. A Kentuckian in 1834 wrote back to Louisville from the Colorado River Settlement of a “large rock of metal which has for many years been considered a wonder. It is supposed to be platinum. The Indians have held it sacred for centuries, and go there once a year to worship it. they will not permit any white person to approach it. It is almost impossible to make an impression on it with chisel and hammer. when struck it gives forth a ringing sound which can be heard miles around.” He states that their party was unable to break off any specimens to bring home. In an item appearing in the New York Mirror” of October 20.1838, a traveler, lately returned from a prospecting tour in the San Saba country, tells of having found an “Enchanted” or “Holy” mountain on the upper waters of the Sandy- beyond all doubts the Enchanted Rock of other accounts The traveler reports that “the Comanches regard this — hill with religious veneration, and Indian pilgrims frequently assemble from the remotest borders of the region to perform their paynim rites upon its summit.

Samuel C. Reid Jr. in a book published in 1848, The Scouting Expeditions of McCulloch’s Texas Rangers, says in connection with a scouting trip that Captain Jack Hays had made into the unsettles vicinity of the Enchanted Rock. “We are unable to give to the reader the traditional cause why this place was so named, but nevertheless, the Indians had a great awe, amounting almost to a reverence for it, and would tell many legendary tales connected with it and the fate of a few brave warriors, the last of a tribe now extinct, who defended themselves there for many years as in a strong castle, against the attacks of their hostile brethren. But ever since, the “Enchanted Rock” has been looked upon as the exclusive property of the phantom warriors. This is one of the many tales which the Indians tell concerning it. Some of the superstitions connected with the Rock grew out of the Indians to report that mysterious flames danced on its summit on moonlight nights. The unromantic hand of science has probed these fancies, however, and points out that the weird dance of the flames takes place only on nights after a rain, when the moon shines fully on the rounding sides of the rock. These nocturnal spirit fires of the Indians, and the glitter of the mica by day. combined to evoke the awe and veneration of the Comanches. Although this fear of the rock led the savages to sacrifice living victims in attempts to placate the spirit that dwelt on the summit, it also makes the place a sanctuary for hard-pressed rides among the whites, if their ponies were sure-footed enough to scale the heights.

The Indians also believed the Rock to be enchanted because of the eerie sounds emitting from the huge dome at night and the peculiar sound made in walking on it. The noise made in walking on the rock has been described as exactly as if one were walking on a thin crust over a cavern. The sounds at night have most often been heard after a hot day. Geologists accredit this peculiarity of sound to change in the temperature of the rock. A cool night following a hot day causes the granite to expand and contract, thereby emitting a creaking sound.