WELCOME TO
The Moss Ranch at Enchanted Rock

The concept of The Moss Ranch at Enchanted Rock wedding venue is to offer the bridal party and family a private, relaxed weekend to enjoy your Texas Hill Country Wedding starting on Friday allowing time to decorate for the wedding, also having the option of the wedding rehearsal and dinner in the evening. On Saturday everyone can relax and focus on getting dressed for the big event. There will be plenty of time on Sunday to remove decorations before checking out.

The main house has a 1500 square foot event room with a 16 foot by 8 foot sliding door opening up to the large back porch. The event room has a fireplace and a serving kitchen/bar area. There are 3 bedrooms and 3 baths in the main house with sleeping accommodations for up to 14 people. Across the breezeway is a smaller building with restrooms and a catering prep kitchen.

The Moss Ranch at Enchanted Rock is located 18 miles from the historic and iconic German town of Fredericksburg, TX, home of The Admiral Nimitz Museum of the Pacific War. Located in the heart of the Texas Hill Country, Fredericksburg is just a little over an hour drive from San Antonio and Austin. It is known for some of Texas’ best bed and breakfast and guesthouses. Fredericksburg also offers a unique shopping experience with some of Texas’ best specialty shops, restaurants, and attractions.

Each year thousands of tourists from all over North America visit Texasâ€™ Stone Mountain which is second â€“ and but slightly second â€“ to Georgiaâ€™s and possessed of a glamorous and adventuresome saga that dates back to the days history cannot penetrate. The mammoth Enchanted Rock, rising in a slow curve from the wooded hills…

HISTORY OF THE MOSS RANCH AT

I grew up at Enchanted Rock. My parents owned the 2300 acre property which was a family run tourist attraction from the early 1950‘s to the late 1970‘s. We lived in the house right in front of Enchanted Rock on RR 965. It is now a park ranger’s residence and you can recognize it by the red metal roof. My parents were Charles and Ruth Moss. My dad’s great grandfather was Mathew Mark Moss who fought in the battle of San Jacinto in 1836. He received a land grant for his pay from the Republic of Texas. The land grant was located near Oxford in Llano County. Mathew Mark Moss’s son Charles Tate Moss (my dad’s grandfather) bought thousands of acres of ranch land in Llano County including Enchanted Rock. My dad’s uncle actually inherited the Enchanted Rock property but had a failing business and to keep the property in the family my dad bought it right after World War II when he came home from serving in the Army stationed in the states during the war. 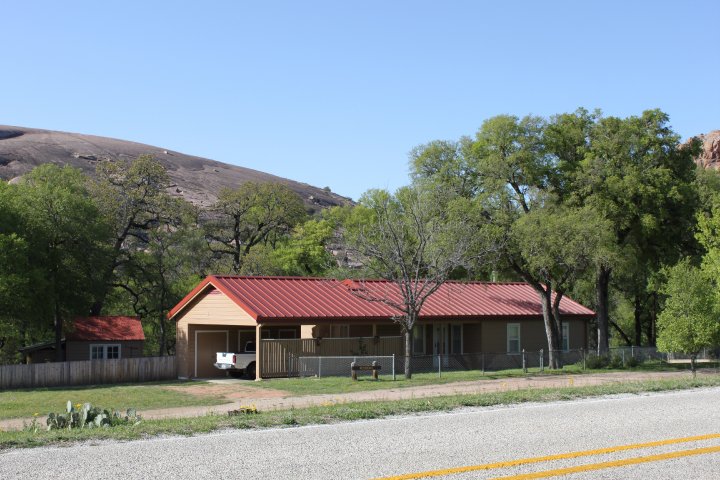 According to the story, my parents told me my dad had $2,000.00 and was the only one in the family who had enough money at the time to purchase the land from his uncle. He partnered with the Faltin family from Comfort to purchase the land for $35.00 per acre. My dad ran cattle on the property but it didn’t become a family run tourist attraction until the early 1950’s when my parents married and decided to build a house right in front of Enchanted Rock close to the road. It was a small one bedroom house and didn’t really look like a family residence and as my dad put it “people thought it was a beer joint and stopped by to get something to drink”. Soon people stopped and asked if they could climb Enchanted Rock so my parents eventually realized what a treasure they had in their backyard and opened it to the public. They had a small concession stand in the park which was located directly behind our house and down the hill close to Sandy Creek. My parents would greet people as they drove into the park, pull up to the concession stand, and pay 50 cents to climb “The Rock.” They could also purchase soft drinks, candy, ice cream, and Indian souvenirs.

On January 1st 1966, President Lyndon B. Johnson and the first Lady climbed Enchanted Rock. I went with my dad to meet them as they were walking on the rock. I was 10 years old but I remember it well and I regret not having a photo of it because when I went back to school after the holidays and tried to tell the story to my classmates of course no one believed me.

During the mid to late 1970s people came with big metal frame kites and wanted to hang glide off the rock to the creek. My dad had them sign a waiver and let them glide off the top of the rock sometimes landing on the trees instead of in the creek bed. Of course that “sport” was dangerous and that phase didn’t last long. Then the mountain climbers started repelling off the back side of Enchanted Rock which is still a very popular sport.

My parents sold Enchanted Rock to The Nature Conservancy in 1978. Lady Bird Johnson met with my parents and helped to negotiate the sale. My parents wanted to make sure that Enchanted Rock would be preserved and not commercialized or ever quarried. So it became a Texas State Natural Area instead of a Texas State Park. Then the property was turned over to Texas Parks and Wildlife and opened to the public by 1980. Only the land north of RR 965 was purchased and the Moss and Faltin families retained the 500+ acres south of the paved road. All of the land has been divided and sold by the families except the 107 acres I have kept which has now become The Moss Ranch at Enchanted Rock. It has always been my dream to open a family business and share my beautiful view of The Rock and once again relive some of my childhood memories.